Afghanistan 2021 - Prospects for Peace and Development - Options for Canadian Support

“Afghanistan 2021 - Prospects for Peace and Development - Options for Canadian Support” 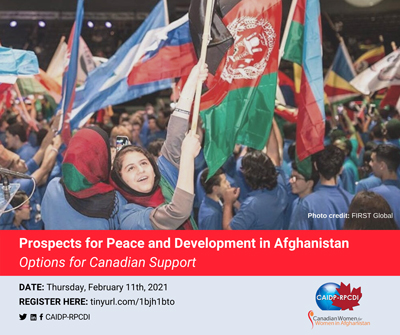 The Canadian Association for International Development Professionals (CAIDP) in collaboration with the Canadian Women for Women in Afghanistan is pleased to announce a virtual panel discussion (webinar) to provide a briefing on the current situation in Afghanistan.

The webinar will focus on current realities, the status of peace negotiations, development aspirations and trends for Afghanistan, and current Canada-Afghanistan relations.

The webinar will be introduced by the President of CAIDP, Mr. Abbas Sumar and Ms. Murwarid Ziayee of Canadian Wormen for Women in Afghanistan and will moderated by Michael Petrou,Editor-in-Chief, Open Canada.

The panelists will include: 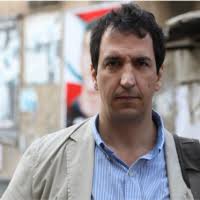 Michael Petrou is a historian and journalist. He is currently the editor-in-chief of Open Canada, an online magazine about Canada’s place in the world, published by the Canadian International Council. Petrou has previously worked as a foreign correspondent, reporting from across the Middle East, Europe and Central Asia. He has won three National Magazine Awards and the Ottawa Book Award. Petrou was the 2017-18 Martin Wise Goodman Canadian Nieman Fellow at Harvard University. He has a doctorate in modern history from the University of Oxford and a master’s in Atlantic Canada studies from Saint Mary’s University, where he was a graduate research fellow at the Gorsebrook Research Institute.

Ms. Fawzia Koofi  - is a member of peace negotiation team representing Islamic Republic of Afghanistan. She has made her leadership journey in a country of internal conflicts. After completing her baccalaureate degree, she entered a competitive medical school. But soon after the Taliban took over in September 1995, and barred women from access to all education! Finding the doors of a university education closed to her, Fawzia focused her energy on women’s right organizations, and worked closely with one of the most vulnerable group such as Internally Displaced People (IDP), and marginalized women and children. After the fall of the Taliban, she continued law faculty night shift while still working with UNICEF Afghanistan on women and children's rights. She eventually got her bachelor's degree from Kabul University law and political sciences faculty and her Master on International relations from Geneva School of Diplomacy, from Geneva City.

Fawzia’s political family background and orientation to public service propelled her to take hold of the new opportunities that were paving the road for many women. She decided to run for a seat in parliament from the Badakhshan province, she was elected Member of Parliament from that province in September 2005, right after the first elected parliament after 33 years, Fawzia was elected as the first woman Second Deputy Speaker of Parliament in the history of Afghanistan.

Some of the key women’s initiatives that she has championed include the improvement of women’s living conditions in Afghan prisons, by approving resolutions, with her efforts a commission to work on the issue of violence against children is established, the commission was chaired by Afghanistan first vice president. She tabled many progressive laws protecting women and children including law on violence against women, anti harassment law on women and children, child act and contributed to laws that ensures protection of Human rights for citizen. She promoted women and girls education, by advocating for access to good schools, as well as creating opportunities for non formal education for out of school children in her constituents, Badakhshan province.

She is the author of letters to my daughters and the favorite daughter book which is her auto biography. In 2016 she has been elected as president of IPU's Human rights Committee, IPU works to promote democracy and peace around the world.

He has been titled as Young global leader by World Economic Forum, fearless mind of 2013 by times magazine and many more. She has been awarded many prestigious awards including women of knowledge, Minerva and many more.

She is the leader of a newly established political party called Movement for Change in Afghanistan.

She was recently nominated for the Nobel peace prize which is a great accomplishment and awarded CASA award for diversity and development. 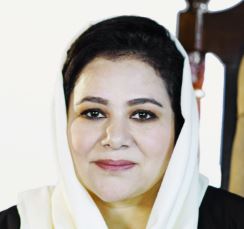 Nargis Nehan given the title, “Iron Woman of Kabul” by Bloomberg in 2019 when she was the Mines and Petroleum Acting Minister, has dedicated her life to developing Afghanistan by empowering women and youth and fighting corruption through government and civil society.

Ms. Nehan is one of Afghans who migrated to Pakistan during civil war. While her family’s priority was to meet the very basic needs of life, given her passion for education, her family found ways to financially support her to complete her education. As soon as she graduated from high school, she started working for an international organization to support her family while pursuing her higher education in the evening.  When the Interim Administration of Afghanistan was established, Ms. Nehan returned to Afghanistan to take part in her country’s reconstruction. Ms. Nehan has served public offices as Director General of the Treasury Department at the Ministry of Finance and Senior Advisor to the Ministers of Education and Higher Education. During her service, Ms. Nehan initiated several reform projects and implemented them successfully. During her service in public sector, Ms. Nehan earned the reputation of a patriot and a reformist woman.

After seven years of service in public sector, Ms. Nehan felt her routine jobs were not satisfying her passion, and she left government to found EQUALITY for Peace and Democracy (EPD) a civil society organization for empowering women and youth. As of now EPD is working in 16 provinces of Afghanistan.  Ms. Nehan also served as member of Supreme Council of Afghanistan Central Bank. After establishment of National Unity Government, Ms. Nehan once again was called to join the government, serving as Advisor to President for two years and Acting Minister of Mines and Petroleum for almost three years.

Currently, Ms. Nehan advocates for inclusive and sustainable peace while through her consultancy firm she is also working with public and private sectors for women economic empowerment. Ms. Nehan is a role model in Afghanistan, demonstrating capacity, commitment and dedication of Afghan women with a vision and determination.

Christopher Gibbins, has been with the Department of Global Affairs Canada since 2006. He was appointed Executive Director of the Afghanistan and Pakistan Division at Global Affairs in August 2020, bringing with him significant experience in the region including three years as Consul General in Chandigarh, India (2015-2018), and numerous Afghanistan assignments. These included Counsellor (Political Affairs) with Canada’s Embassy in Kabul (2009-2010), and a total of five years with the Afghanistan Task Force and Division in a range of capacities between 2007 and 2014. Additional assignments have included: Minister-Counselor, in Washington D.C., and Director of the Humanitarian Policy and Natural Disaster Response Team, during which time he led the Government of Canada’s whole-of-government humanitarian assessment team to Nepal following the devastating earthquake in April 2015. Previous Government employment included assignments with the Department of Canadian Heritage, the National Film Board Canada and the Privy Council Office (Foreign Secretariat). Prior to joining the public service, Mr. Gibbins worked in the private sector in Edmonton, Alberta, Vancouver, British Colombia and London, England.
He obtained a Bachelor of Arts (Honours) in Film and French Literature from the University of Alberta in 1993, and a Doctorate of Philosophy in Comparative Literature from the University of Alberta in 2001.